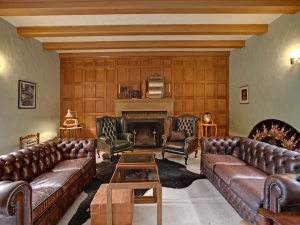 Most mornings at Taylor Made Retreat start out with a two-hour AA Big Book study group of Alcoholics Anonymous, the so-called “Big Book.” Some of you perusing this website won’t have much of an idea what that might be like, so I thought I’d give you an example of a fairly typical day’s study. This is a bird’s eye view of our group from Wednesday, March 20, 2019.

That day’s study centered around Chapter 1. This chapter is “Bill’s Story”, the story of how one of AA’s founders, Bill W., bottomed out in his alcoholism and came to acquire certain information that led to his sobriety and the founding of Alcoholics Anonymous. For the purposes of today’s blog, we’ll focus on the time just prior to Bill’s last visit to Town’s Hospital, the sanitarium where Bill dried out after his last run, pages 8 through 16.

Some of our newer guests were working on their First Step, “We admitted that we were powerless over alcohol and that our lives had become unmanageable.” We used Bill’s gradual progression into deeper and deeper states of hopelessness and despair to explore examples of Bill’s powerlessness and unmanageability. Group discussion was used to help clarify, through personal examples, the differences between powerless and unmanageable.

Other guests were working on Step Two, “We came to believe that a power greater than ourselves could restore us to sanity.” For those people, we used the visit of Ebbie T., one of Bill’s old drinking buddies, to explore the beginnings of Bill’s

spiritual awakening as influenced by Ebbie’s obvious change in behavior, in that he was sober. As Bill struggled with the sharp difference between his own despair and Ebbie’s joy at being sober, we used the discussion between the two men as a jumping-off point to explore our own current state of being able to use a power greater than ourselves to restore us to sanity.

By studying the experience of the AA founders as described in The Big Book and looking for the similarities in our own lives, we establish and develop identification with both the problem of alcoholism and with the solution found in the AA program.

Want to join the discussion?
Feel free to contribute!

2019: Bringing Lightness into the Dark
Scroll to top